As Easter is upon us, this week's blog will be all about rabbits and art. Rabbits have been a fairly popular subject across drawing, painting and sculpture. We'll be taking a look at some inspirational examples, and then hopping into some drawing ideas and tips.

Where rabbits and hares are present in the world, they are usually accompanied by art. They play a number of roles, but since antiquity have often been depicted as symbols of fertility, cyclic rebirth, and springtime, among many others.

( 'Mary and Infant Jesus with a Rabbit' by Titian)

Rabbits have often accompanied Christian art, playing different roles over time, but are often associated with Easter due to the ideas of rebirth surrounding the resurrection. Alongside the rabbit's rapid lifecycle signifying rebirth, this association is strengthened by its living and emergence from underground burrows.

('Tsuba with a Rabbit Viewing the Autumn Moon' by Tsuchiya Yasuchika. This Japanese tsuba – hand guard to a sword – depicts a rabbit looking at the moon)

Continuing the idea of cycles, rabbits are common feature in East Asian arts, often associated in folklore with the moon, alongside a tradition of seeing a rabbit in the moon (much like Westerners are familiar with the man in the moon). This varies, but in abbreviated forms, the rabbit is pounding the ingredients for ricecakes in Japanese and Korean folklore, whilst in Chinese folklore, it pours the elixir of life for the Goddess of the Moon, or makes medicine.

('Two Rabbits with a Sledge in the Snow' by Beatrix Potter)

Finally, we have to take a quick peek at Beatrix Potter, who regularly drew rabbits from life. Her illustrations are an excellent example of how to combine human-like gestures with animal characters, whilst maintaining the naturalistic look of the animal.

Many of the ideas from the previous post DFH: Get Started Drawing Pets can be applied to rabbits. The most distinctive feature of rabbits are their long ears. These are a little tricky to draw, but are best approached with the idea that the ear is a curved surface, folding in on itself.

To draw the ears, start by finding the direction relative to the rabbit's head – they originate right at the top. From there, lightly draw the outline of the ear. As you build up detail, remember the ear has thickness, and curves in on itself, like an incomplete tube. I tend to work down to the shapes created by the ear folding in on itself, then shade in the direction of the forms.

( 'Rabbit' by Mitsuhiro Ōhara. This rabbit netsuke shows have easily the rabbit can reduced to simple shapes.)

When drawing the rabbit's body, remember that it is covered with fairly dense fur. It isn't long, but it is enough to cover up most anatomical landmarks and smooth everything out to rounded masses. 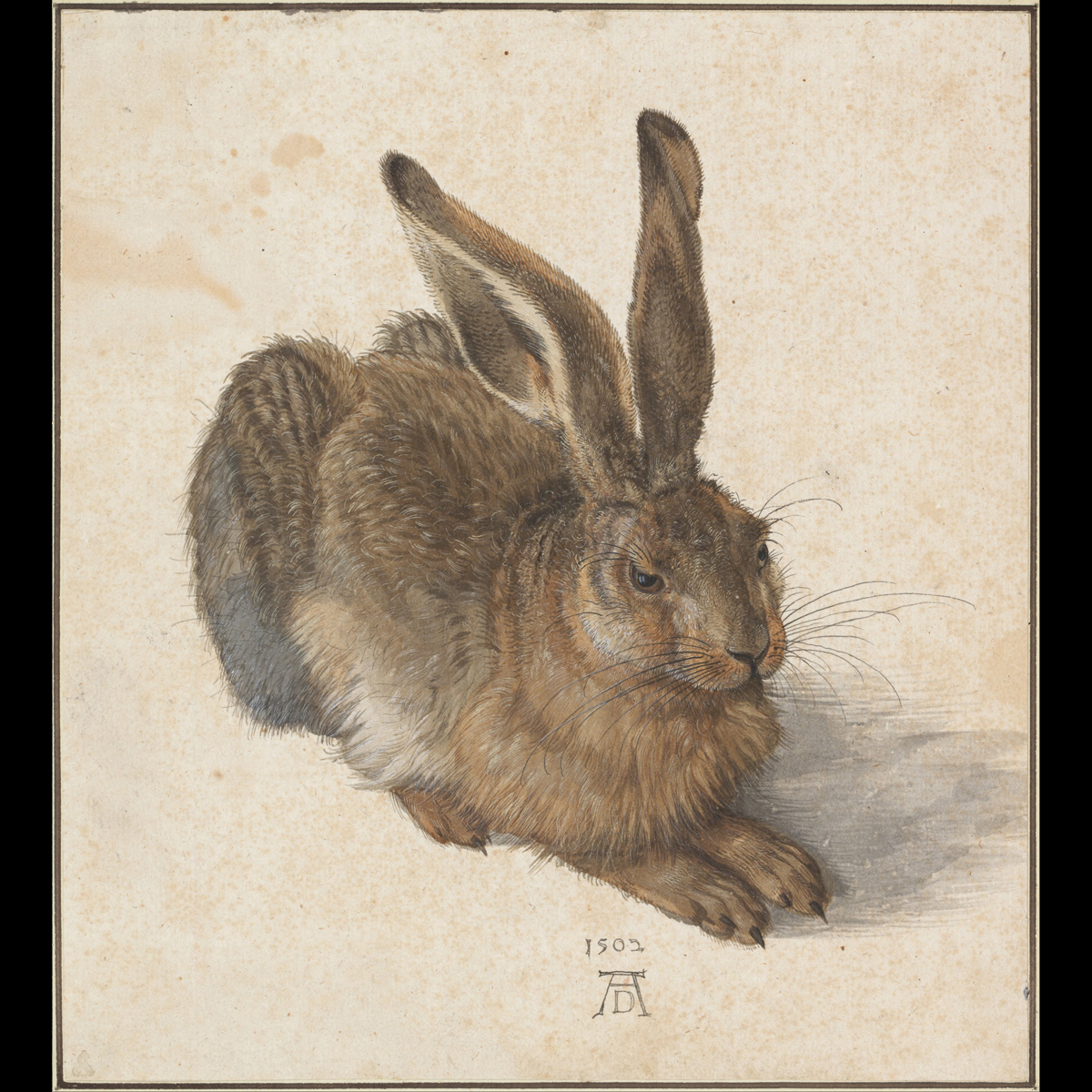 Because the overall silhouette of the rabbit is very simple and round, we need to use the fur direction to describe form, and the texture is important as well.  We can see in the example above that Dürer took great care in showing the direction the fur is growing in, and how it creates rings around places like the neck as the skin rucks up underneath.

Over to You: Rabbits & Gesture

Rabbits are a great subject to practise animal gesture drawing. In this simple exercise, we will look at the relationship between shape and gesture.

When drawing animals, I often start with gesture and approximate shape. Here, we can see back and forth flow of rhythms through the shape of the rabbit when viewed side on, focusing primarily on the core of the body. As the body shape is simple, it is often easier to draw from this base than a more anatomical one, especially for quick sketches. Often, when sketching out the gesture, I will start at the head and flow from one side of the body to the other, bouncing back through the curves – this is indicated by the arrows.

As we move to foreshortened poses, volume becomes more important. On a simplified level again, ignoring much of the anatomy and focusing on volumes, we can see how the undulating shape overlaps itself and folds in front. It is also important to remember that the rabbit has rounded volumes. Use fur direction to help indicate this.

This is fun to do as a drawing game; you can lay out a page of the initial blob shapes and swap with another person to complete the rabbits.

To help get you started, we have included some lovely reference images for you to draw from below, kindly donated by Jennie Webber. Jenny is an illustrator with a passion for animals and conservation who runs the wonderful organisation Wild Life Drawing; the photos were taken by Spencer Wilton for Wildlife Drawing.

This is the fifth of our weekly 'Drawing From Home' blog posts, commissioned during lockdown to help you draw more at home. Please do share your drawings with us, as we would love to see what everyone is up! Just tag us with @Draw_Brighton on social media or use the #DrawingFromHome #DrawBrighton hastags.

Published by Lancelot Richardson on 12 Apr. ' 20
Questions? Send us an email.